Fishes of the Thurston Nature Center

The fishes of Thurston Pond were sampled by seining on October 26, 1991. The following seven species were caught and released:

Glen Black, Bill Phillips, and Jim Breck sampled the fishes in the pond on September 23-24, 1996, using several fyke nets and a seine. The only species of fish caught were goldfish and black bullheads. These species are tolerant of low oxygen conditions in the winter. Glen, Bill, and Jim did not find the slow-growing bluegills that were present in previous years. Bluegills are not tolerant of low oxygen, and may have died during the harsh conditions during the winter of 1995-1996.

In 2007 and 2008, we have been mostly been finding fathead minnows and goldfish during two informal surveys. 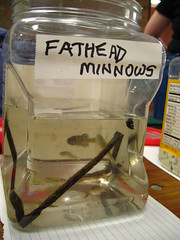 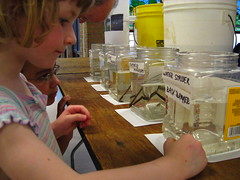 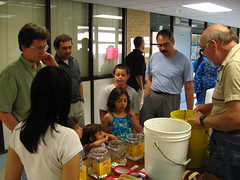 Photos are from the Thurston Elementary School Ice Cream Social, June 6th, 2008, when we had a display on pond life from Thurston Pond

Fishes of the Thurston Nature Center