Restoration work for the pond and wetlands began in June 2015. Follow the progress on the blog

Also check out the latest newsletters on this page.

Oct., 2013: Programs with Thurston School were in full swing.

Aug. and Sept., 2013: New trail signs were installed and the Thurston School Garden was planted.

July, 2013: Thanks to all who helped with clearing and chipping the brush piles at the North Prairie part of Thurston Nature Center on July 30, 2013. Thanks to the Vallem family for coordinating.

June, 2013: A fun video about clearing buckthorn is released and tree labeling project gets underway.

April, 2013: Workdays were successful on April 13 and 14 thanks to the many fantastic volunteers. Also, the kickoff of the Tree Pals program. resulted in about 12 trees getting "pals" who will photograph them during the upcoming season. We are excited to post the photos on the tree page. Thanks to Mike Conboy for sharing his incredible wealth of knowledge. The hemlock and the hackberry and the Bald Cypress trees already have a photo posted. Want to sign up to photograph a tree this coming season? Just email [email protected] .

October 18, 2012: We are meeting again in the new school year (we just met on 10/18).  We discussed new ideas to raise money to dredge the pond to make it a deeper, clear water pond again and possible 2013 Phragmites control.  The drought of 2012 affected the pond - there was very little water in the pond, even after some Fall rains. March, 2012: We had another Spring prescribed burn of the Thurston prairie area this year! It appeared to be a big success. October, 2011 - Cardno/JFNew has fixed the Thurston Pond berm and improved the outflow channel, and two Eagle Scouts have completed projects arond the Nature Center - thank you everyone! Read about the Eagle Scouts projects (and see a photo) on page 2 of this newsletter.

Here's a photo of the berm looking better, in April 2012: April 7, 2011 - We are working with Ann Arbor Public Schools and JF New to get the problems fixed that have developed with the berm, and the need for a better pond outlet now that the Antietam drain connection brings more water into the pond.  Work is scheduled to start May 15th, 2011 on these improvements. 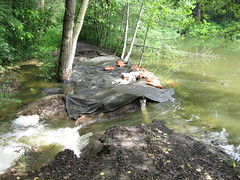 August 29, 2009 - Finally, I've loaded the "Friends of the Thurston Nature Center" donation form (we are committee of the Thurston PTO, which has 501(c)3 status).  Please consider a donation and help us as we try to restore Thurston Pond to a better ecological condition!  The Word version of the donation form is here and the PDF version is here.  Thank you in advance!

Summer 2009 - J.F. New Inc. has installed new Aqua-Swirlers and raised the berm, so we should be getting more water into Thurston Pond and be able to have a higher water level (helping during dry periods).  Thanks everyone at J.F. New!  Here are some examples of the work from July 11, 2009: 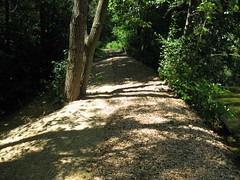 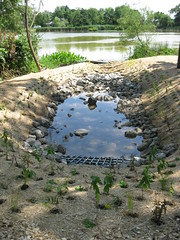 August 2, 2009 - A new version of the plan to meet Thurston Pond's dredging needs is now available here.  Thanks Tom Edsall for sharing this!

July and August 2009 - The movie "Flipped" was filmed on part of the Thurston Prairie where Castle Rock Entertainment built a temporary set (now removed - it was a house) for the Rob Reiner-directed film.  We look forward to getting to see it eventually!  A photo of the set is below, and there's a Youtube video showing a bit of the filming here. The "Flipped" set, summer 2009! The Youtube clip of the filming.

Upcoming on Friday, 6/5/2009, at the Thurston Ice Cream social (at about 6pm, and repeating) - we will be showing the 1967 "We're on our Way" video that shows Lady Bird Johnson and Thurston Elementary kids turning the ceremonial first shovel of dirt to establish the Thurston Nature Center!  Come see what the area looked like over 40 years ago!

"One, titled "Flipped,'' is being directed by Rob Reiner... The film company for "Flipped'' wouldn't comment. But Neal Foster, chair of the Thurston Nature Center Committee, said a representative of Castle Rock Entertainment/Warner Brothers recently contacted him to express interest in using Thurston Prairie, in the northern part of the Thurston Elementary School property, as a set for the movie.   The site is owned by Ann Arbor Public Schools but is maintained by the Thurston Nature Center Committee.   "We've been working with (location) managers for a while,'' said Ann Arbor Public Schools spokeswoman Liz Margolis, who's acting as liaison between the film studio and district. "I know they had liked that neighborhood in the Bromley subdivision area, but we don't have anything confirmed.''   Confirmation may come as soon as this week, Margolis added."

4/25/2009 - The oak tree planting day went very well, with over 40 enthusiastic volunteers (including 6 families from Cub Scout Pack 160!) planting the trees well before noon.  Thank you everyone.  We look forward to continued work in creating the Thurston Oak Savanna - the trees are hopefully just the start!  Here's a couple of sample photo of our group: 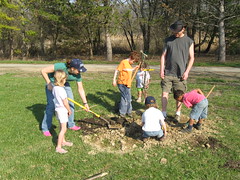 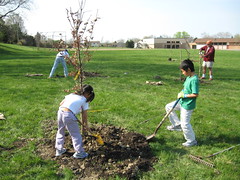 3/22/2009 - part 1 - Spring Work Days:  The next Work Days are on April 4th (1-4pm) and April 5th (2-5pm), 2009 - meet near the OHAC pool at the end of Yorktown Drive on Saturday and the west wood chip pile on Sunday to help with spreading woodchips and other activities!  Tasks to Choose From:
* Distribute woodchips on trails
* Care for your Adopted Trees
* Adopt-A-Tree or flower area and work on it
* Gather Brush that was cut this winter, stack in unused area
*Mulch small trees with woodchips
- Dress for the job (e.g. closed-toe shoes) and bring appropriate tools if you have them (shovel, rake, clippers, saw, wheelbarrow, etc.) Questions:  Call Mike Conboy at 665-4027 or e-mail him at or any Nature Center Committee Member.
Note:  If you would like to help, but have a conflict, you can work at another time that is convenient for you.  Photos from last year are available here:  http://www.flickr.com/photos/[email protected]/sets/72157605226206794/

3/22/2009 - part 3:  Thurston Elementary Rain Garden prep!  Thurston Elementary School is establishing a rain garden as part of a grant from the Huron River Watershed Council.  If interested in helping set up the rain garden, please come by the front of the school anytime on Saturday, May 9, 2009.  Work will begin at 9 am.  If you know you can do this and want to help, please contact Margaret Weiss at for more details.

10/26/2008:  The Orchard Hills Maplewood Homeowners Association held the 2008 Fall Festival at the Thurston Nature Center - photos are available!  The birds from the Leslie Science Center were popular, as was looking for pond life.  Thanks to everyone that came and to everyone that made it happen! 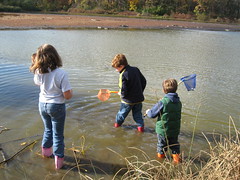 10/25/2008:  Our grant proposal to the Michigan Department of Natural Resources to create an Oak Savanna in the Thurston Nature Center (on an acre in the northern end of the school grounds) has been approved!  Thanks to everyone for their hard work on this.  Plans will be forthcoming, including dates for planting trees.

10/21/2008:  Please see the great article in the Ann Arbor Chronicle about Thurston Pond and the Nature Center, which great quotes from TNCC chairperson Neal Foster!

10/18/2008 & 10/19/2008:  The Thurston Nature Center Committee and friends held the Fall 2008 work days.  Thanks to everyone for clearing areas around trees young & old, spreading woodchips, and all the other work that volunteers got done!

9/15/2008:  There will be a Thurston Nature Center Committee meeting (Sept. 15, 2008), in the Thurston Elementary School Libary.  The main item of business will be Scott Dierks, P.E., of J. F. New, going over with us plans (prepared by Stantec) for the upcoming tunneling operation this October down the right-of-way near Bluett to install a 54" diameter steel pipe, which in turn will contain a 30" diameter pipe, to carry an estimated 13 million gallons of stormwater annually into Thurston Pond.

8/25/2008:  Dave Szczygiel, a long-time friend of the Thurston Nature Center, was featured in the Ann Arbors news:  check it out here!

4/20/2008:  Community members, including many enthusiastic Cub Scouts from local Pack 160, helped to spread wood chips along the nature center trails, as part of our annual Spring Work Days.

4/8/2008:  We had a prescribed burn of the Thurston Nature Prairie, part of our regular program to improve wildflower and wildlife habitat.  Thanks to Mike Conboy for organizing this!

1967 The 1967 film "We're on our Way" features wonderful footage about the Thurston Nature Center's early days.